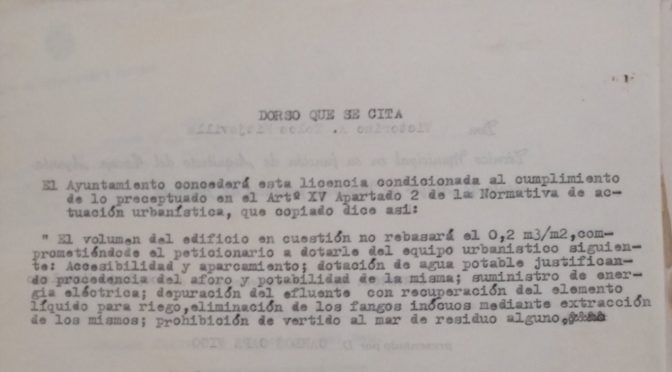 The licence for the hotels in Son Bou given in 1970 allowed a building space of only 5,000 cubic meters, yet the buildings which were constructed were of 93,000 cubic metres.

Consultation of the old files does not clarify, at the moment, how the two tower blocks were able to be built.

You can add your petition to the many which have been received by the Meliá company regarding the modernization of the buildings to include having less impact on the countryside.

According to the file which GOB consulted on the controversial hotels of Son Bou, the Comissió Municipal Permanent (Municipal Standing Committee) of 18 December in 1970 conceded the requested licence for the construction of two hotels but on condition that the volume of the building was not more than 0,2 cubic meters per square meter. Considering that the plot was 25,000 square metres, the construction would have been more than 19 times that authorized by the licence.

Despite the surreal technical report which justified the two buildings (see the posting The Curious Report on the Hotels of Son Bou), what was certainly noted was that it was not possible to build beyond the parameters of 0,2 m3 / m2. It must be understood that at that time the plot along the front line of the sea, as it was not an urban area, was treated as rural land by the Ley del Suelo (Land Law) of 1956.

The danger of a high level impact on the landscape provoked a submission from the Provincial Delegate of the Ministry of Information and Tourism to the Alaior Town Council. This was dated 18 February 1971, when he warned that he had seen a report on the two hotels projected for Son Bou and cited the regulation reminding that the buildings would be in contradiction to the principal of defending the landscape. This far sightedness was not enough to stop the project from materialising.

As is known the hotels were built with the 12 floors that can be seen now. At some later time, the parameters of the building were changed (they were built in 1973) or, at some time later, the municipal planning department gave protection for the work done.

Right now there is a project being presented to the Alaior Town Council to modernise the two buildings. If approval is given on the plans more or less as presented, it implies that the impact on the landscape of the two tower blocks will last another 50 years.

GOB is encouraging sending letters to the Meliá Company for them to reconsider the proposal and to intervene by redesigning the plans in order to reduce the impact on the landscape which has affected Son Bou for many decades. You can add your signature by clicking here.