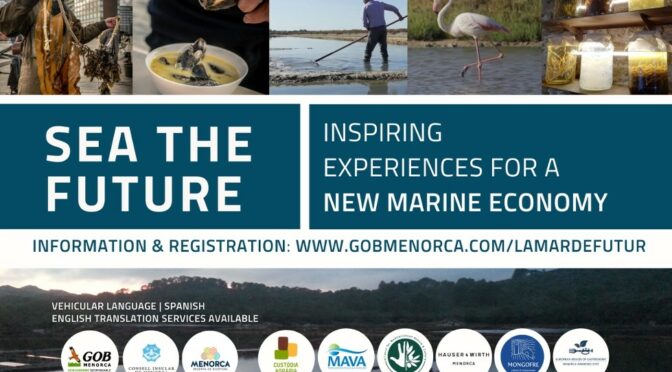 The conference taking place on 12 and 13 May in Menorca, will bring together highly interesting ideas in order to understand the economy and conservation possibilities of the sea. People interested can book here.

The Aponiente Restaurant is becoming an interesting communicator in favour of biodiversity. Environmental commitment is shown in the restoration of abandoned salt flats and in research laboratories to reduce the consumption of species that suffer from over fishing. It promotes the reutilization of by-products that are currently being thrown away and research is being done to find new foods with a high production capacity. Juan Martin, responsible for environmental projects, will make this presentation.

Havhost is an organisation dedicated to regenerative marine cultivation in Denmark. Its formula requires some simple infrastructure that is being replicated along the Danish coast. It generates communities committed to the production of quality food and that capture carbon with a simple to use system that is easy to repeat. Its executive director, Joachim Hjeri will give a talk. The conference will have simultaneous translation.

The necessity to go forward with an economy that incorporates the environmental problems is an increasingly urgent challenge. The international scientific reports warn that time is running out to make significant changes. To understand this in context and see what the options are, Professor Fernando Valladeres, member of the Spanish National Research Council, will give the opening talk.

The importance of artisanal salt flats as spaces of refuge for wildlife has been an addition in recent times and new economic activities are sought to conserve these sites. The MedArtSal project makes an annual announcement to motivate new economies all round the Mediterranean. Macarena Castro, doctor of Biology at the University of Cadiz, will explain new discoveries.

The Concepció salt flats at the end of Fornells Port, are the last stronghold of salt production in Menorca. The current property needs to be restored into an artisanal workshop for the whole area. In order to preserve and improve the biological wealth of the area, a custodial agreement has been signed. Guillermo Casas, an engineering representative of the property and Miquel Camps, the GOB coordinator of land policy, will present an idea for the restoration of this site that adds such important cultural and natural values.

The Salarte association works on the recovery of salt flats and surrounding areas, the multiple economies that are generated, the enhancement of cultural knowledge associated with these places and the positive effect that can be induced on their natural values. Mara Escasi and Juan Martin will explain the experiences that are being promoted.

A final round table will try to add any contributions and combine proposals for the future.

The conference days will take place at the Lazareto of Mahón on the first day, with a subsequent visit to the Isla del Rey, and to the salt beds of Concepción on the second day, with transfer to Mongofre Nou.

Payment covers transport and meals. It is possible to attend both days or for one only. More information here.