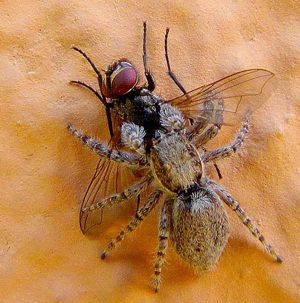 Summer is the time for flies. They are creatures with surprising abilities but also with noisy limitations. The same with humans. The perception of how we can be affected differs between each of us in our respective worlds. The fly can die on a glass pane even though there is an open window alongside. As humans we are able to analyse and improve on some of our schemes that previously had been difficult to clarify.

The fly, like many other insects, is provided with a system which allows it to detect smells from a long distance. They have the devil’s own facility for finding the smallest hole in the kitchen to sneak into a closed oven which is housing the next meal.

But, on the other side of the coin, the business world is used to making much of the metaphor of a fly sticking to the window for claiming high-mindedness towards a personal change that turns someone into a businessman. Without making too much of the fly analogy, it seems evident that we have our own glass windows restricting our abilities especially for analysing situations.

There is a type of tourism which wants the tourist to be able to go where there are no crowds. It is a type of tourism known for some time by those dedicated to advertising certain deals and who make promotional images of places always showing them without many people.

People like to observe and catalogue happenings but have difficulties in knowing what point of view to take. We are accustomed to look at ourselves in the mirror and so we see ourselves in reverse. We often do not see the reality. Perhaps because of this, in last August, there were tourists and chance visitors coming to Menorca for the first time who were shocked and surprised by the crowds to be seen on the beaches and roads.

So the famous phrase of Gabilondo that the Menorcans like tourism without the tourists, surely falls short. Or, at least, is not exclusive to Menorca. If we look at the tourist promotional material of other places we see a similar pattern. It happens as much in Asturias as Extremadura, as much in Corsica as Britain.

When many advertisers use the same techniques of images without people, it usually works. Sometimes we have internalised the discovery of new pristine areas like they would have been for the hunter gatherers of primeval times. Or perhaps we have been so brain washed with cinema images that we all look for empty tropical beaches.

What is clear, despite the paradox, is that these images with few people are a good way in which to attract many people. The capacity that each one will have afterwards to see whether or not they are part of the overcrowding which surrounds them, is another question.

Some are angry at the lack of protest before of the felling of the holm oaks at the entrance to El Pilar. But the campaign for the main road has been won, and the impact it has had on the project, which will now be resumed, is much less overall than projected in 2013 on the main Menorcan road. To get that far, many people raised their voices but not anymore.

Why is there a good part of society that has its own criteria, no matter what it costs them to understand those who suffer from seeing the window which lets them perceive reality only with partisan eyes? When people are motivated with a large ideological spectrum, then it is not a partisan campaign. Some – even though they see the poor fly trapped – know to detect the intervening window pane.

There are those, also, who need to have information beforehand, who consult the internet or have attended activities where the details of the forecast projects are explained. Then there are those without previous knowledge who protest noisily when the machines start to work. The effect of their surprised reaction is comparable.

In houses where a determined environmental biodiversity is conserved, windows encrusted by flies suddenly have spiders specialising in taking advantage of the insects´ inability to overcome their obstacles.

Some spiders hunt passively, spinning a web and waiting for whatever becomes entangled. Others do not wait but try to catch the fly with a silk thread, or, if they are spiders that jump, they get on top of the fly and paralyse it.

Bumping into a window has its dangers from which others can profit.