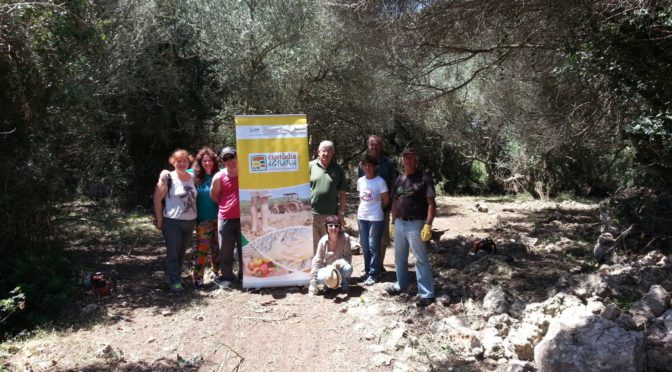 Wild vegetation growing in between cultivated areas is very valuable in Menorca because it provides habitats for animals as well as contributing to the characteristic landscape of the island.

The landscape looks like a mosaic demonstrating so well how responsible land management can be in equilibrium with environmental conservation. The mixture of cultivated and uncultivated land usually following the lines of the walls as well as the scrubland which has been left between the fields, allows for the biological control of pests and for a diversity of natural habitats.

There are many small areas of trees which are not large enough to come under the category of woodland but which in Menorca are called Boscarrons. So, it was in one of these copses in which a group of agricultural volunteers were working on Sunday 29 May.

One of the best ways to be able to conserve the exceptional countryside of the island is to find out who are best at managing the land; in other words, the farmers. The Boscarrons are sometimes completely cut up for firewood, but there are more sustainable uses.

At Talati de Dalt, a farm which has signed up to the Land Stewardship Scheme and which forms part of the network of farms promoted by GOB, is an area of trees which has been rehabilitated for providing shade to cattle during the summer. By cutting back only the lower branches of the trees, many of them without leaves because they do not get the sun, they form an ideal shelter for the animals.

The volunteers worked all morning, with a break in the middle for an outdoor snack, rehabilitating this area and separating out the large branches for firewood. At the end, they had the satisfaction of seeing a newly adapted area and were happy, also, to benefit from the shelter on that sunny summer day.