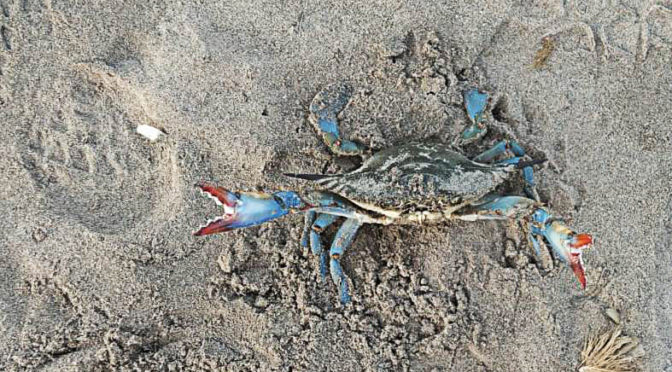 More and more blue crabs are being seen on the coast of Menorca. They are considered to be one of the most invasive species of the Mediterranean. We have asked the Ministry of the Environment of the Balearic Government to persuade the professional fishing industry to catch this species, as a way of controlling its population. The blue crab was first found in 2017 and it has already spread to many areas along the island coast.

The blue crab becomes very large, to more than 20 cm in width, and is very aggressive. It has and adverse effect on the ecosystems wherever it colonises. It eats crustaceans, molluscs, fish and algae. It always lives near the coast, at less than two metres deep, especially in the mouths of rivers, where there is a mixture of salt and fresh water. It originated on the Atlantic Coat of the Americas from Canada to Argentina. Now it is spreading throughout Europe and other parts of the world. It was introduced to the eastern Mediterranean in the 1930s. It has been found along the Mediterranean Spanish coast since 2012. All types of this species have colonised particularly in the Ebre River Delta, from which the aquaculture and fishing industries have suffered. It has very powerful claws that allow it to prey on cockles and mussels.

It can be seen in Menorca, for example in the coves along the south coast, Es Grau, Port d’Addaia and the Algaiarens beaches. Here are some images in a video taken in Port Addaia by Lalo García and Txell Sabartés. On this can be seen their swimming ability where they propel themselves with their flattened, rearmost pair of legs. We would like to have public help to learn more about this species.

It has been calculated that each female can lay between one and two thousand eggs. The larva live in the plankton which are dispersed by the sea currents. It is practically impossible to eradicate this species once it has colonized an area.

The blue crab is gastronomically appreciated in its area of origin and is catalogued as a commercial species. It is promoted by restaurants in the Ebre River Delta area. This is a way of mitigating the negative effects on the fishing industry and puts direct pressure on the blue crab population. We consider that before the blue crab invades more areas the professional fishing industry should be persuaded to catch this species and promote it as a gastronomic product.

How can you help and where do I send the information?

Take a photo of the observed crab and send your observation to https://biodibal.uib.cat/en/#/