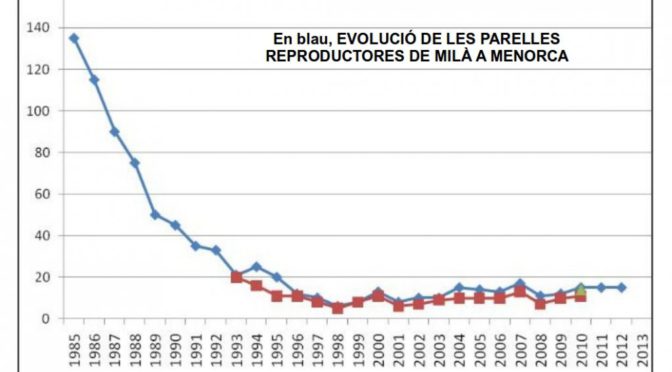 4 red kites, 1 booted eagle, 4 kestrels, 2 barn owls, 5 ravens, 3 gulls and 2 unidentified birds make the list of birds electrocuted during 2015 and 2016 and which, at the moment, is on the record of the Council for the Environment of the Balearic Government, the ministry responsible for the protection of endangered species.

Electrocution caused by some pylons poses a problem which has been known for more than 20 years. In Menorca there have been some legal proceedings but more recently it is a subject which has been almost put aside. For example, in 2014, no electrocuted birds were reported, but that is because there were no inspections.

However, electrocutions continued. Some red kites, an endangered species considered in danger of extinction in the Balearics, found at the base of one pylon led GOB to intensify its search for information concerning this problem and which could be affecting many other species.

Electrocution is produced on pylons when the birds perch on them (many birds use them as observation points) and their wings touch a live cable. This problem does not happen on all pylons because some are designed which do not cause danger (where the connection cable passes below) or because the cables are insulated.

This deals, therefore, with a subject for which there are simple technical solutions. But it has to be put on the agenda of the company responsible for the cables (a company which each year closes with some astronomical profits) to become aware and caring so that the species do not suffer systematic and unnecessary deaths.

You can help by signing the petition and passing it on to all your contacts.