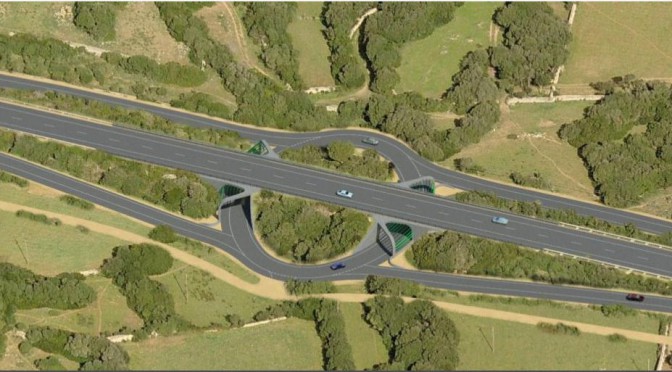 Manifesto to ask the new Government of Consell Insular to redirect the interventions of high impact roundabouts in the main road of Minorca and to establish a dialogue process that provide citizen participation and come to a road model more integrated with this island characteristics. You can sign it here. END_OF_DOCUMENT_TOKEN_TO_BE_REPLACED

GOB cares for the environment and for this island, especially. It gives voice to all those people who feel disempowered with no say in important local government decisions that affect the character and purpose of the island and its unique nature. For some time, many people in the general public as well as institutions have watched with horror the excesses of the works to the main road between Mahon and Ciutadella and can now see how disproportionate the plans for roundabouts are on this small and essentially country island. Visitors love its tranquillity, its virgin beaches, its country walks as well as the sports of both sea and land. They come to get away from the hustle and bustle of cities and the endless horror of motorways. Locals and visitors alike are shocked at the threat to the honorific of Reserve of the Biosphere by such an unnecessary attack to the countryside. END_OF_DOCUMENT_TOKEN_TO_BE_REPLACED

One day, this matter will be over and will not take up the time and energy which could be devoted to other subjects. The main purpose of mentioning it this time is to explain the inability of GOB to proceed with a legal case against the Consell regarding the environmental damage of the proposed outsized and unnecessary roundabouts. Justice is expensive and has been made more so by a manouvre on the part of the Consell of legal procedure on which the legal costs are based. END_OF_DOCUMENT_TOKEN_TO_BE_REPLACED

GOB announced earlier in April that the Consell, out of respect for Menorca’s Talayotic inheritance and its candidature for World Heritage status, had abandoned the idea of making macro-roundabouts on the road between Alaior and Mahόn in the preservation area of rustic land. Instead, it had decided to redesign the two existing half built cement structures and combine modern with ancient materials by placing prehistoric flagstones on top of them as a reminder of Menorca’s prehistoric culture. (See attached photograph.) Apparently, the flagstones were found nearly a year ago when making the enlargements to Es Mila. And the Consell also promised to collaborate with the zoo and the adjoining farms that use ecologically sustainable methods in the area to make a theme park on sustainability which would certainly be of great value to tourism. END_OF_DOCUMENT_TOKEN_TO_BE_REPLACED

GOB is the acronym for its Catalan name, Grup Balear d’Ornitologia i Defensa de la Naturalesa founded in Mallorca in 1973 and in Menorca in 1977. It is a non-profit making non-governmental organisation which exists to care for the environment and to increase public awareness on ecological matters. As it is non-political it gives a democratic voice to the population against government actions that are often unnecessary and are contrary to keeping the important balance between man and the environment. END_OF_DOCUMENT_TOKEN_TO_BE_REPLACED