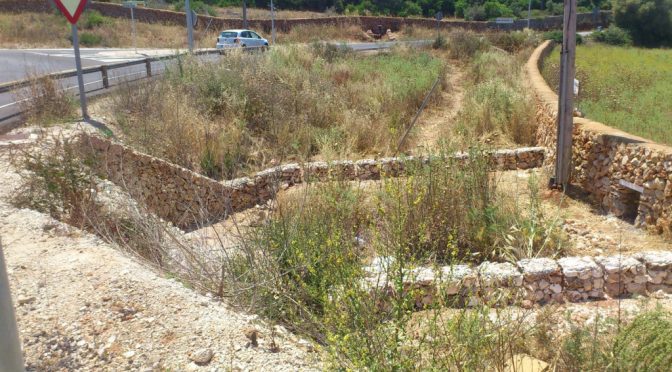 There are alternative ways to be followed that help to avoid a lot of existing problems. New routes which, once constructed, allow travel in a different way. And this is applicable for land, sea and air.

As well as accidents befalling humans, which usually gain sufficient media publicity, roads have a much less well known accident rate for wild animals. At a world level the numbers are shocking. In Menorca we do not have accidents with large animals such as in certain areas of the Peninsular (deer, bears, hogs….) but a study made in 2003 estimated that about 2,000 hedgehogs on the island are run over and die each year. Every year.

To confront this type of problem and also tackle other important questions such as the breaking up of habitats, the isolation of populations and similar environmental conflicts, wildlife pathways, or ecoducts, have been invented, that lead animals towards crossings that can be safe for traversing the supposed obstacle of a road cutting through the countryside.

Ecoducts are ideal for giving new access trails, offering different options for overcoming the barriers which until now have been customary. There are some that go over the road and some – like those that are being made in Menorca taking advantage of the road works – that pass below. They are remaking connections and helping to overcome negative collateral effects. These are physical ecoducts.

But there are also other types, such as procedural ecoducts. Alternative ways can be based on changing schemes that give negative results and transforming them by using more sustainable methods. A good example is the ozone layer which for decades was being lost because of the chemical compounds used then in refrigerators. Ozone is essential in the upper layers of the atmosphere for filtering the dangerous ultraviolet radiation of the sun (paradoxically, we are contaminated when it is found in lower layers).

After different scientific reports, that were difficult to believe in many traditional academic circles there came an international reaction encouraging a change of procedure. What good times those were when world leaders were working for the common good, without Trumps and similar, more local, visionaries. The hole in the ozone layer above the Antarctica is closing, even though climate change could be weakening it in other places.

We also need ecoducts for the sea, in this case intellectual ones. Posidonia is like mana from heaven. It makes sand (90% in some beaches), generates oxygen and holds carbon dioxide. It shelters a huge number of species and minimises sea erosion. It is very useful as much for the living meadows as for non-living remains along the coast.

For the last tourist season, a marine surveillance service was enabled and visited some 50,000 boats in the Balearics. Of those, only 10% gave a negative response when asked to move to a place without a posidonia meadow. In other words, there is a minimum of 5,000 yacht patrons who are still insensible to conservation.

These people should have been provided with an ecoduct (beyond the sanctions that already exist) to show them that everyone else seems to understand that they can go to sea without anchoring above posidonia. If the nautical companies are involved in information campaigns for their customers and help organise days for collecting plastics on a grand scale and promote ways of going to sea without causing destruction, perhaps that 10% will want to act more logically and take greater care.

In looking for excellent results obtained from positive influences, some American ecoducts are beginning to grow plants in danger of extinction from seeds. The flowers help previously threatened pollination. The results have been so good that they are now seeding endangered flowering wild plants to grow near their roads.

Some of these roads have become tourist sites because of the attractive landscape they give. The ecoducts are new bridges for augmenting the positive effects when ideas have been planted in an imaginative way. It is only necessary to overcome the negative pressure of those who reject anything concerned with the environment. It is already known that in times of conflict bridges are the first things to be destroyed.

(Translation of article published by Miquel Camps, as the Territorial Policy Coordinator of GOB, in the Diari Menorca on 14 January 2018)

One thought on “Ecoducts for progress”