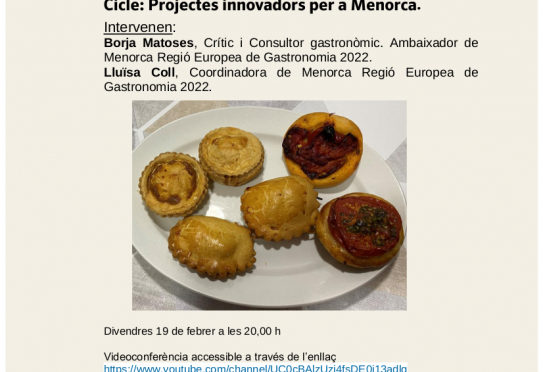 Menorca was appointed in January last year to be the Region of European Gastronomy for 2020. To talk on what it will be about and the importance such a project can have for Menorca, will be Luisa Coll Hellyer, who was appointed the coordinator for the project and Borja Matoses, food critic, consultant and ambassador for the Menorca Region of European Gastronomy. The event will take place on Friday at 8 pm and you can follow it at https://www.youtube.com/channel/UC0cBAlzUzj4fsDE0j13adlg

The title of the Region of European Gastronomy is awarded to areas that adhere to the policy and philosophy of, and have met the criteria developed by, the International Institute of Gastronomy, Culture, Arts and Tourism, to promote regional sustainable development by different sectors in collaboration. One of the requirements demanded for Menorca is to work in collaboration with different sectors of the Island. Initial stakeholders were signed up by the Consell Insular of Menorca; ASHOME; the Association of Bars and Cafes of Menorca; The Association of Journalists and Gastronomy Writers of the Balearic Islands; the Adult Education Association of Menorca; CAEB Menorca; the Guild of Fishermen of Ciutadella, Fornells and Mahon; the Country Cooperative; the School of Tourism of Menorca; and Fra Roger, Gastronomy and Culture. The list will increase with other groups.

This is the second round table of the series of innovatory projects for Menorca, organised by the Ateneu of Mahon and GOB in collaboration with the Menorca Preservation Fund.