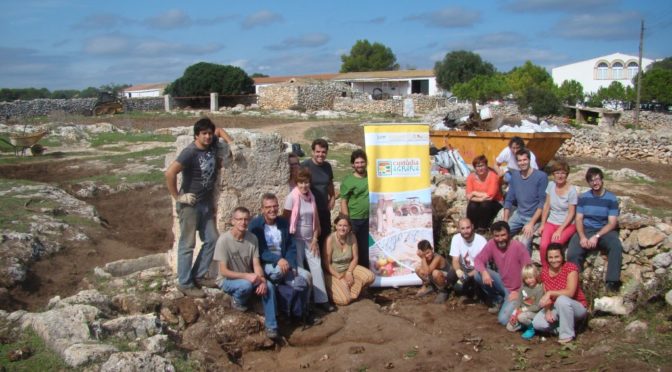 On Sunday 10 October, a group of GOB volunteers were working to restore a water cistern which catches rain water in Torralbet. This is one of the farms forming part of a network each of which has signed up to the Land Stewardship Scheme.

The first phase was to clear the scrub and clean the stone work. Originally the water cistern was enclosed on four sides by dry stone walls, but some had fallen into the interior and a large amount of earth had accumulated in the ducts cut into the stones. Furthermore, a fig tree had taken root and the roots had broken the spouts and seriously affected the structure.

One part of the group also helped in removing waste which must have been from the old dump belonging to the houses that had been discovered recently. A container of 4 cubic metres was filled by this rubbish.

The rehabilitation of the cistern will carry on with the work of professionals that GOB has organized. That will be the restoration of the drinking troughs and the side walls and will give the cistern a system of water extraction powered by solar energy.

The restored troughs in the network of the Land Stewardship Scheme farms will have ramps incorporated which allow not only the farm livestock but also wild animals to gain access to water safely. So this will be a double benefit, both environmental and agrarian.

We would like to thank all the volunteers for the time they have given for most of Sunday morning. Your participation has made viable the recovery programme of interesting environmental features. The work is sponsored by the Island Council of the Menorca government.