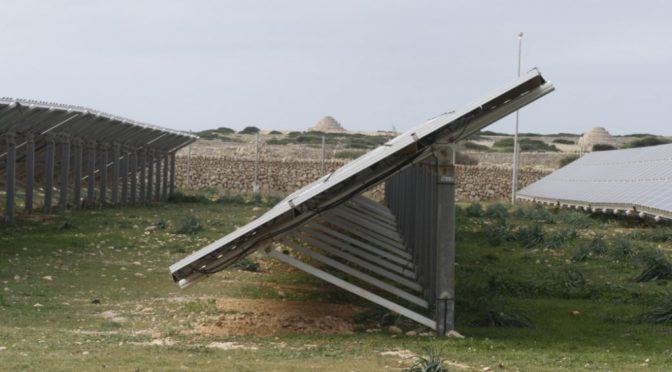 It has been sometime since the debate on the evolution of energy began. Everyone declares they are in favour of renewables, but at the moment of making a decision on where and how, there are usually discrepancies.

In Menorca, GOB has been analysing for some years possible ways for making a significant change from fossil fuels to renewables which is fundamental to the subject of energy.

One of the crucial aspects of this analysis is the verification that it is not possible to make a change in energy just by putting solar panels on roofs. Making use of these spaces cannot be put aside (GOB has two solar panel installations on roofs in Menorca) but it has to be recognised that this is not the way to make changes by any appreciable percentage.

We must remember that, at the moment, our island is using 99% fossil fuel for its energy supplies. If we think only of electricity, it is 97%. Put another way, the windfarm of Milà (when all four windmills are working), coupled with the solar parks of Son Salomó and Binisafúller, add up to only 3% of electricity provision. Apart from this small amount, in 2017 we are still supplied by gasoil and carbon fuels.

Against this background and with climate change which is already here (with important environmental and economic consequences) there is only one significant project on the table: the enlargement of Son Salomó. With this installation it would be possible to go from 3% to 20% in renewables. There is no other project in view which could make such a percentage increase in renewable provision. For this reason, GOB has worked to see how it would fit in with the region.

Currently, the economic and legislative situation make it so that small solar parks are not viable. As a result, nearly all those made some time ago have failed. In fact, if we want solar parks, they will need to be very large. Son Salomó is a large park, of 104 hectars, and so the impact it could have on the terrain requires analysing.

As a result of the negotiations which were made in Menorca for the first installations it means that a methodology can be applied quite distinct from that used normally. Here, the fields are not altered by land movements nor by levelling. Some metal girders are stuck directly into the land and the panels are added in such a way that the highest part is less than two metres. This is a system which maintains the land in its original state by being completely reversible. And by placing the panels to a low height, it is possible to manage the impact on the landscape with few problems.

There are no notable natural ecosystems in the fields of Son Salomó. Neither does it have much farming interest because it suffered over exploitation in the 19th century provoking a considerable process of desertification. But it was precisely this intensive farming which provided the motive for building many small agricultural buildings and constructions of dry stone walling and, with the many rocky outcrops from the ground, these confer a special attraction to the Punta Nati environment.

Is this attractive landscape compatible with the projected solar park? We at GOB think so, and we do not characterise ourselves as people who think little about the landscape.

As the panels are mounted to a very low height, they do not intrude on the fields that border the road, and the study of their environmental impact incorporates the study of the landscape to guarantee that the installation is not seen either from the access road or from the Cami de Cavalls.

The initial restriction made on the area of interest at Punta Nati declared it a place of Cultural Interest and covered 2,400 hectares. The projected park, then, represents 4.5% of this area. Seen in this way, Punta Nati could remain an emblematic landscape of Menorca and, at the same time, the park´s renewable energy could increase supplies from 3% to 20%.

All the small farm buildings, cisterns, bridges and other ethnological items within the solar park can be compulsorily restored under the direction of an archaeologist. Thus, it is certain that there would be 100 hectares with solar panels but it is also certain that it can be worked out so that, in fact, with the project conditions, it would not affect the landscape of Punta Nati.

We all share the wish for a society that consumes less and learns to operate in a more efficient way, but until this happens, which does not seem soon, we continue having to use very contaminating energy.

The proposed project has an investment of 50 million euros. Actually, there is no possibility of such a cost being met by the government nor by local investors. And we must remember this is talking about increasing the power supply from renewables to 20%. That still leaves us with 80% to work out in the most adequate way possible.

If we do not have more renewables, electric vehicles will not help to contaminate less (because charging them with electricity from the central power station is not very efficient). Wind parks are much more controversial than solar parks (they cannot be concealed in the landscape). The gas which is needed to be taken to the houses is fossil fuel which does not help to lower emissions.

The people who love Menorca need to take on board that we all have work outstanding on energy transition. This obliges us to confront a debate which is not easy, because renewable energy requires land. One wonders what the alternative is to make it a reality and not a chimera. If we do nothing and decide to wait, the smoke will continue to rise.