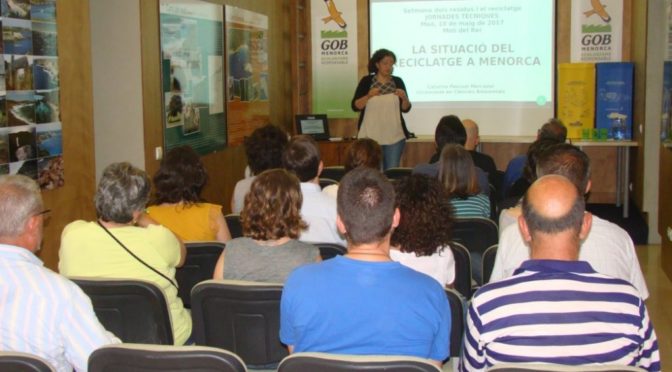 The virtue of systems of collecting rubbish door to door; the need to separate organic material and the great economic savings; the consequent achievement of a lower volume of remaining garbage; the power of publicising by films; the call to attention of the rubbish which people throw onto the streets and paths, have been some of the themes of the recent Week of Rubbish and Recycling celebrated in Menorca.

Of the refuse which goes into the landfill, nearly 85% can be reused if separated correctly at source. Menorca has a long way to go yet to learn to produce less rubbish and, especially, to reuse and make the most of the materials. The conference given by the Consorci Insular de Residus (Island Consortium on Rubbish) dismantled the urban myth which many people use to excuse any need to recycle when they say it is finally separated at the landfill.

Aluminium goes to a factory in Álava, some of the plastics to Valencia, others to Alcalá de Guadaira, metals to Mallorca, cartons to Barcelona… Each material already has a recognised cycle, where it becomes processed and then useful, and so avoids saturating the landfills or being incinerated.

The experiences known by the Mancomunitat del Raiguer and of the Agentona municipality, are inspirational. There are municipalities which now, as a consequence, have only 15% refuse, with that is implied an economic saving of land which avoids being made into a landfill. The correct separation of organic material is one of the keys.

The two different films shown in Es Castell, Mahon, Alaior, Ferreries and Ciutadella attracted new people to understand the world of rubbish created currently by human society, where so much is not biodegradable, and where it is generally left with no recycling procedure, a difference from nature where all its material breaks down cyclically.

The week ended with a day of cleaning the four roads around Llucmaҫanes. The conclusion of the people participating was that interior roads were clean enough, but in areas nearest civilization a large quantity of non-organic dirt and rubbish was found. It was clear that not many people have understood the basic necessity of depositing their rubbish in adequate places.

15 sacks were filled with rubbish and some areas (such as the path towards the airport) were left for another day. The materials were then separated and deposited in the corresponding containers.

The Week of Rubbish and Recycling was made possible thanks to an agreement between GOB and Ecoembes, with the help of the Consorci Insular de Residus.